Dr. Beverly A. Cigler, Distinguished Professor of Public Policy and Administration, Penn State Harrisburg, and NAPA Fellow, is the recipient of the 2015 Leslie A. Whittington Award for Teaching Excellence, given by NASPAA, the membership organization of graduate education programs in public policy, public affairs, public administration, and public & nonprofit management. NASPAA’s nearly 300 members are located across the U.S. and in 14 countries around the globe. 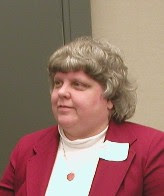 Bev Cigler specializes in intergovernmental relations, especially state and local policy, politics, and management, with key interests in intermunicipal and state-local relations, public finance, alternative service delivery, counties, smart growth, emergency management, and general issues of governance. Cigler is a fellow of the National Academy of Public Administration. She received national awards for her intergovernmental research and scholarship and community building for economic development, a Distinguished Alumni Award from Thiel College, Penn State Harrisburg’s Excellence in Research  and Faculty Service Awards, and statewide awards from the County Commissioners Association of Pa., the Pa. Women’s Commission, and a MS Leadership Award. She was awarded a Legislation Citation for contributions to the Commonwealth and served as a Penn State faculty associate in a legislative research office for 8 years and was twice a Visiting Scholar there. Her published work includes more than 170 articles, including 12 articles/essays in Public Administration Review; dozens of professional reports; and 9 books/edited collections. Dr. Cigler has delivered more than 215 speeches, workshops and testimony to elected and appointed officials of national, state, and regional organizations, and university audiences. nationwide. She currently serves on the boards of the Keystone Research Center (Pa.) and the South Central Assembly (Pa.) and on advisory committees for the County Commissioners Association of Pa., the Association of Pennsylvania Municipal Managers, the Pa. Budget and Policy Center, the Metropolitan Policy Center (University of Pittsburgh)., and the National Center for the Study of Counties. She recently served on a Pa. legislative Local Government Commission study of mandates. She has held numerous leadership positions in public administration organizations, including chair of SIAM and SPAE in ASPA, COPRA in NASPAA, and was president of two ASPA chapters. She has served on fifteen editorial boards.